Best Treks to do in India for Submit views  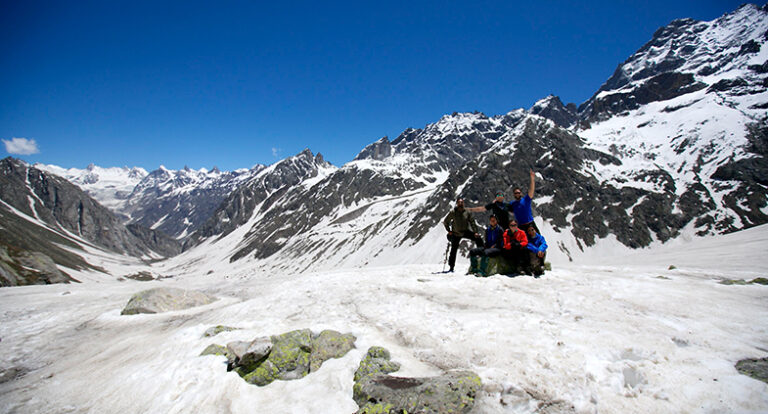 Trekking is without a doubt one of India’s most popular adventure sports, with a worldwide following. It’s a once-in-a-lifetime chance to get a high adrenaline rush while getting up close and personal with nature’s wonders. Trekking routes in the Himalayas range from easy to extremely difficult. These trails feature a wide range of flora and fauna, as well as man-made structures, cultural experiences, religious delights, and other attractions. Check out these best treks in India if you’re looking for such unforgettable experiences.

The popular Hampta Pass Trek is 35 kilometres long, starting in the Kullu Valley village of Hampta and ending in the Lahaul and Spiti Valley village of Chatru. The trip lasts about 4 to 5 days, and the highest point is 4400 metres. It is an excellent choice for your first high-altitude trek. You walk through snow-covered valleys, dense deodar forests, floral meadows, crystal clear water streams, Himalayan avifauna, and Lahaul-barren Spiti’s lands. The trek also includes a night camp stay at Chandra Tal.

The Chandrakani trek is 22 kilometres long and takes approximately 10 days to complete, with a maximum elevation of 3650 metres. The pass is higher in elevation, and the surrounding scenery is breathtaking. The journey begins in the picturesque Naggar Village of Kullu Valley. Enjoy the views of the Pir Panjal, Deo Tibba, and Parbati peaks from the Pass. As you walk away from human eyes, enjoy the solitude provided by meandering paths dotted with oak and fir trees.

The Valley of Flowers trek in Uttarakhand is one of the best trekking tours in India, taking you to both a UNESCO world heritage site and a Sikh pilgrimage site, Hemkund Sahib. The hike is 55 kilometres long and has a maximum elevation of 3658 metres. During the monsoon season, thousands of colourful high-altitude Himalayan flowers cover this pristine valley, giving it the appearance of heaven. As a result, it is one of India’s best August treks. It is suitable for trekkers of all ages and begins at Govindghat. Experience spiritual bliss while admiring Mother Nature’s finest creations.

The best months are April to June and October to December.

The best trekking in India can be found in Sikkim, where a 5-day Dzongri trek, ranging in difficulty from easy to moderate, can be undertaken. Dzongri Trek, one of the best winter treks in India, begins and ends in Yuksom and spans 21 kilometres with a maximum elevation of 15,000 feet. If you have limited time and want to see the best Himalayan views, including Dzongri La peak and Mt. Kanchendzonga, this trek is a must.

This trek takes you through Siachen, Bakkhim, Tshokha, and Kanchenjunga National Park, as well as hanging bridges, gushing waterfalls, and white and red rhododendron flowers.

Chopta, a picturesque hamlet still relatively unknown to visitors, is also known as Uttarakhand’s “Mini Switzerland.” In Chopta, you can wake up to a cool, refreshing breeze and birds chirping, a far cry from the blaring horns of cities and other hill stations. When the crimson rays of the sun kiss the snow-laden Himalayas in the morning, the view from Chopta is energising.

Chopta is rich in flora and fauna because it is surrounded by the region’s dwindling pines, deodars, rhododendrons, and other conifers.

The Markha Valley trek is one of India’s best Himalayan treks and one of the largest valleys in the Ladakh region. This strenuous hike begins in Leh and takes you through the Chilling, Skiu, Sara, Hankar, and Nimaling. You will pass through tiny hamlets and be amazed at the preserved monasteries, ruined forts, and temples as you trek for ten days.

One must travel 65 kilometres and cross two cardinal passes, Ganda La and Kongmaru La, to reach a maximum altitude of 5,200 metres above mean sea level.

The Garhwal region is one of the best trekking destinations in India, with the challenging Rupin Pass Trek lasting approximately 7 days and reaching a maximum altitude of approximately 15250 feet. This 52-kilometre journey begins in Dhaula, Uttarakhand, and concludes in Sangla, Shimla, Himachal Pradesh. This trek is popular among experienced hikers due to its variety of challenges and stunning scenery. It is only open to those over the age of 14, and it entails walking through various terrains such as rugged meadows or snow, as well as encountering waterfalls and a hanging village. Views of Kinner Kailash Peak are also spectacular.

Helicopter ride in Mumbai: Everything to know