5 Destinations In And Around Kasol 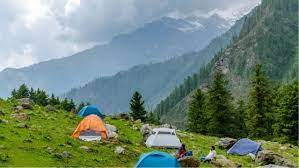 Himachal Pradesh is among the most visited mountain tourist places in northern India in the Himalayan region. The desire in you will be forced to stay here forever. Pick up any Himachal travel guide, chances are you will be mesmerized by its beauty within minutes. This state has a lot to offer. In fact, it is the best tourist attraction in North India.

Tourism Himachal Pradesh has something prepared for nature lovers. Its beauty lies in its diversity. You have lush valleys like Kinnaur, Kullu and Kangra and barren terrains of Lahaul and Spiti. The stories of Malana fascinate tourists as well as the Buddhist culture in Mcleodganj. Exploring Dalhousie with its rich colonial past is a pure pleasure. Famous hill stations like Shimla, Kullu and Manali. Kaosl are dotted with meadows, orchards, picturesque villages and a rich colonial past.

It is home to picturesque hill towns and resorts such as Dalhousie. Himachal Pradesh, host to the Dalai Lama, has a strong Tibetan presence. This is reflected in its Buddhist temples and monasteries, as well as the lively celebrations of the Tibetan New Year. The region is also known for its hiking, climbing and skiing areas.

Starting from the confluence of River Parvati and River Beas, the valley is known for its coniferous forests and crystal clear mountain streams. Nestled in these forested hills is the charming village of Kasol. Kasol is perfect for a vacation if you want to relax in the lap of nature. The village is an open space on the banks of the river Parvati where one can spend lazy afternoons. The river is full of trout and is an ideal place for fishing.

Kasol is an ideal destination for backpackers, hikers and nature lovers due to its picturesque valley, pristine mountains and great climate throughout the year.

Kasol has several hiking options that are open for year-round use and offer stunning views of the city, nearby mountains and villages like Malana, Tosh and Rassol. The hikes are strenuous and will take several days to complete, but have been used by locals for generations. Kasol is a picturesque village in Himachal situated along the banks of river Parvati. Commonly known as the ‘Amsterdam of India’, Kasol is a tourist attraction that is fast gaining fame as a popular hub for tourists, hikers and nature lovers. Located 23 km from Bhuntar and next to the religious town of Manikaran, Kasol is one of the best places in the country to just sit back and relax amidst the panorama of snow-capped mountains, pine trees and a gurgling river.

To get a real feel for the culture in this region, pay a visit to the village of Malana. Malana, located a few kilometers from Kasol, is a small village inhabited by people living in voluntary isolation. The people of Malana claim to be of Aryan descent, and as a result they avoid interacting with outsiders. However, the village has many scenic sights and is often called “Little Greece”. Kasol is inhabited by a large number of people from Israel, which is evident from the abundantly available Israeli food and street signs written in Hebrew. Kasol has several roadside cafes that serve delicious food and the experience of sitting and enjoying your food amidst dark green forests and awe-inspiring mountains makes the food even more enjoyable.

Here 5 places to visit in Kasol:-

The nature park is one of the eccentric places to visit in Kasol. Immersed in a peaceful atmosphere, the park has access to the enchanting Parvati River, which flows through weathered rocks and emits a rumbling sound.

The soothing waters of the Parvati River, originating from the ManTalai Glacier, are definitely one of the must-see attractions in Kasol. The meandering river flows north through the Parvati valley and cascades into the Beas river near Kullu. A chance to leave the fracas of life for a while, you can feel the calm rumbling of the rocks like the gushing of water.

Among the best places to visit in Kasol, Kheer Ganga presents the panoramic beauty of lush green hills and clear skies. The holy place, which lies at the farthest end of the Parvati valley, will dazzle you with skies that are bluer and hills that are greener than usual. A striking opportunity for beginners, the Kheer Ganga trek is considered one of the easiest treks in Kasol. You definitely don’t want to miss this chance. The snow-covered mountains here create a fascinating atmosphere that you will remember for a lifetime. At the top you will find the temple of Lord Shiva where you can enjoy a bath in the hot springs. Kheer Ganga is also home to many hippies from around the world.

Best known for its lush green valleys, snow-capped mountains, magnificent flora and fauna, breathtaking waterfalls and enchanting gorges, Tosh makes it a great place to explore the scenic beauty of Himachal Pradesh. Located on the edge of the Parvati Valley in Himachal Pradesh, at an elevation of 7,874 feet, the village of Tosh is a hidden gem that blesses your eyes with majestic views of the towering Himalayas and sparkling waterfalls. Home to a tributary of the Parvati River – the Tosh River, the Tosh Valley, this tourist spot will steal your attention and make you fall in love with the boundless beauty of Himachal Pradesh nature.

Known as Himanchal’s best kept secret, Tirthan Valley is a secluded heaven 60 km from Kasol. Home to the UNESCO-listed Great Himalayan National Park, this tourist spot of Kasol will amaze you with its magnificence as soon as you arrive. This peaceful and well-preserved destination has many hidden gems of Kasol attractions that you might want to discover.

Best Treks to do in India for Submit views